PGT-A, PGT-M, And PGT-SR, What Do All Of These Acronyms Mean?

When I first began working in the fertility sphere, I felt like I was learning an entirely new language. Healthcare professionals and patients involved in fertility evaluations and treatments have to wrap their minds around a bevy of unusual words, complicated medical terms, and more acronyms than you can count on both hands.

Using different terminology can cause confusion among healthcare professionals and patients. In an effort to improve consistency and communication between fertility professionals, researchers and patients, a standardized glossary of 283 fertility-related terms, and their definitions, was published in 2017.1 This glossary was developed by five working groups and 20 international participating organizations, including the American Society for Reproductive Medicine, the European Society of Human Reproduction and Embryology, and the March of Dimes.

One of the major terminology changes was a recommendation to replace the terms PGD and PGS with the umbrella term of “preimplantation genetic testing”, or PGT.  PGT now encompasses all types of genetic testing on embryos.

To differentiate the specific types of embryo testing, PGT is divided into three subtypes, defined as: 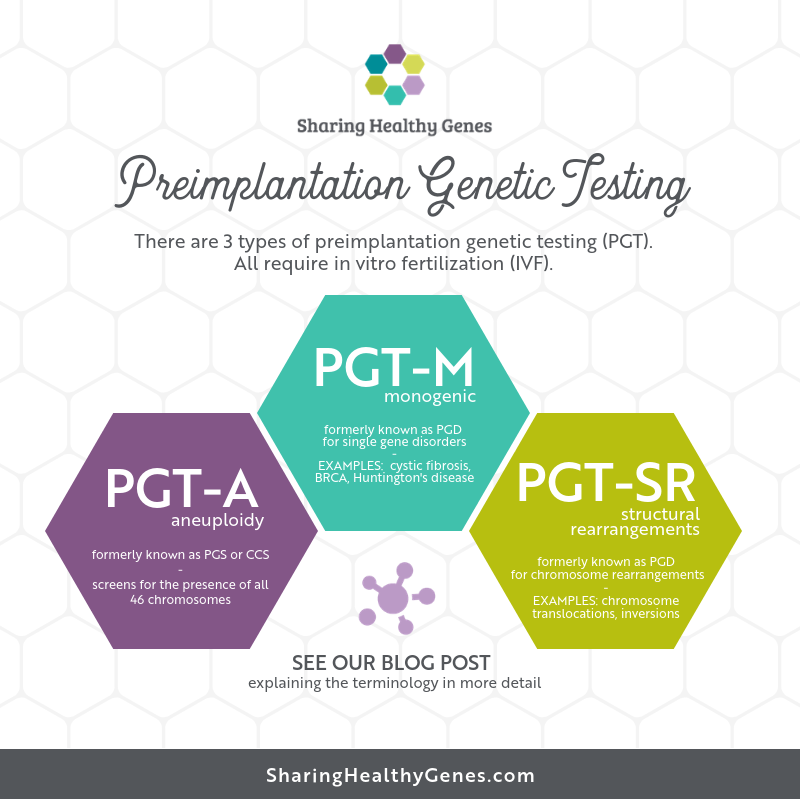 PGT-M will now be used to describe single-gene PGD. PGT-M is used to help individuals or couples reduce their risk to have a child with a known inherited disorder caused by mutations in a single gene (“monogenic”), such as cystic fibrosis or Huntington’s disease.

PGT-SR will now be used to describe chromosomal PGD. This is different from PGT-A, as in these cases the chromosome abnormalities are hereditary due to one or both parents having a balanced chromosome “structural rearrangement” (such as translocations or inversions). PGT-SR reduces the risk of having a pregnancy or child with an unbalanced structural abnormality, which involves extra or missing genetic material and typically results in a pregnancy loss.

While ORM has shifted to using the term PGT, it will take some time for healthcare professionals in other specialties, policymakers, and the public to become aware of this new terminology. It may even take me a while to get used to things, given how many times I use the acronym CCS every day (a lot!). In the meantime, ORM’s genetic counselors are always available to provide further information or to answer any questions about CCS…I mean PGT-A… at geneticcounselor@ormfertility.com.